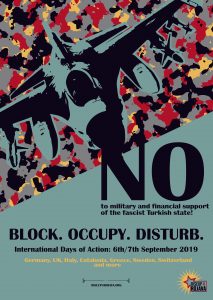 Actions in UK
London : Mobilisation to stop the DSEI arms fair, taking place at the EXCEL on the week of the 2nd of September. On Friday the 6th the climate and environment day will happen. On Saturday the 7th there isthe carnival of resistance with a large and militant mobilisation showing our readiness to #RiseUp4Rojava. See you on the streets!’

While the people of Rojava and Northeast Syria continue their struggle for self-determination, women’s liberation and grassroots democracy and defend themselves against the attacks of jihadist gangs and the fascist Turkish state, the representatives of hypocritical governments shake hands with the Turkish despots.

While hundreds of thousands of people have been displaced from Afrin by jihadist gangs backed by the Turkish army, these jihadists and their families are settling and exploiting the resources of the people. They are selling the symbol of Afrin itself, olive oil from olive trees, through Turkey to Spain and other European countries. This is what the Turkish state means when it claims to be securing its border: ethnic cleansing and jihadist gangs attacking the local people.

While Ankara is forging liquidation plans against the revolution of Kurdistan and Syria, the European, Russian and US arms industries are increasing their profits day by day. This is a direct result of the war in the Middle East and all over the world. We not forget the suffering of the people in Yemen, Palestine and other war theatres. Profits are made that cost millions of lives.

“I wish there were movements in the metropolises that would attack this war, make it impossible. Just cut the supply.”

Wrote the German internationalist Andrea Wolf on 1st May 1997 in the mountains of Kurdistan. Since then 22 years have passed. 22 years in which countless people in Kurdistan and Turkey were bombed and executed by weapons from the Nato and the Western nation states. 22 years in which companies such as Rheinmetall, Lockhead Martin, Leonardo or SAAB and banks such as Credit Suisse and the German bank have made billions with the death, misery and annihilation of people. 22 years in which the Turkish army continues to fire and NATO and the Western nation states supply the ammunition. The population of Kurdistan and Northeast Syria will continue to respond to these attacks with united resistance. We will occupy, disturb and block the places of military, diplomatic and economic collaboration with Turkish fascism in our countries.

The war against the revolutionary movement and peoples in Turkey, Kurdistan and in the whole Middle East has began already on our doorstep. It begins in the ammunition factories and armories, at the desks of banks and political parties, and at the conferences and meetings of hypocritical governments and NATO. It begins with the propaganda of “peace operations”, the militarization of our everyday lives, and manifests itself on Europe’s external borders. It begins where the profiteers and strategists of war meet. Our answer is solidarity, internationalism and anti-capitalism. We will further the struggle against turkish fascism and against the system that oppress us. Let’s show the warmongers and imperialist states what we think of them!