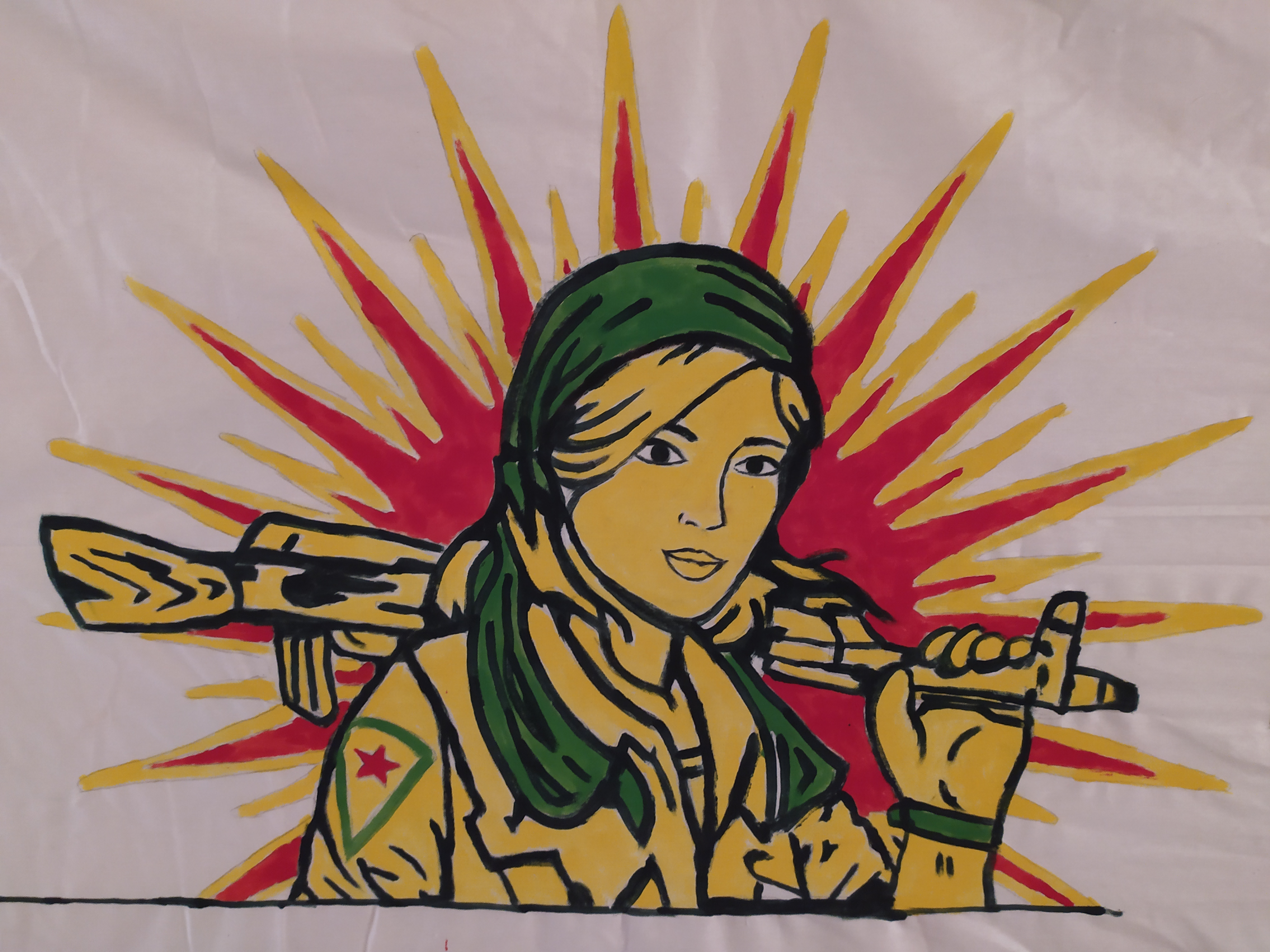 – As soon as the situation in Heftanin is resolved, the next attack on Rojava will follow

There is no doubt that the centre of the war between the revolutionary forces and Turkish fascism has moved to the mountains of Southern Kurdistan, especially to the area of Heftanin last month. The occupying forces of Turkish fascism are trying to break the resistance of the guerrilla with all their efforts and technical possibilities, trying to advance further to the South. The medium-term goal of the occupying forces is to establish a buffer zone several dozen kilometres wide under permanent Turkish occupation, similar to that in Northern Syria. This buffer zone is to be used as a base for further occupation operations against Southern Kurdistan and the provinces of Mossul and Kerkuk in Iraq. Although the forces of the AKP-MHP regime have succeeded in bringing individual hills and mountain peaks under their control in some risky airborne operations, this has not changed the guerrilla presence in the Heftanin area.

Contrary to what the Turkish special warfare media would have us believe, Turkish fascism has not been able to gain any territorial control in Heftanin, but finds itself in the encirclement of the guerrilla. For guerrilla warfare, the more bases the enemy may set up, the more targets there are. The guerrillas can move easily in the depths of Heftanin’s nature and strike at any point. The Turkish fascism has already lost its initiative in the first days of the struggle and is on a lost position in Heftanin. Since the beginning of the occupation operation on June 16, hundreds of Turkish occupation soldiers and aid troops have already been eliminated in actions of the guerrilla. With modern methods, a professionalised structure and new tactics, the guerrillas have managed to keep the occupying forces in check and the Turkish propaganda of apparent success has come to nothing. From sabotage actions, coordinated attacks on the advancing occupying forces, the professional use of snipers to targeted attacks from the air by the guerrilla’s new air defence units, the entire repertoire of the guerrilla of the 21st century is striking. In order to hide its own losses, Turkish fascism also uses gangs, mercenaries and local collaborators and traitors in Heftanin. Thousands of Islamist gangs have already been mobilized from Idlib and the occupied territories of North-East Syria, and new forces are also being shifted from Libya to Heftanin. Kurdish collaborators are also involved in the crimes of the occupiers in many different ways.

While almost all political parties and organisations of Southern Kurdistan took a stand against the occupiers and condemned the attitude of the regional government, Barzani’s KDP continues to openly support the occupying operation, blames the resistance forces and legitimises the massacres of the Turkish occupiers. While the central government of Iraq has remained largely silent, various patriotic-democratic forces in Iraq have also called for the establishment of a national united front against Turkish fascism in recent days. What is clear, however, is that both the KDP and the Iraqi government are part of the occupation concept. The real architects and strategists behind the Turkish occupation, the United States of America, have also openly expressed this reality with their call for a united struggle against the PKK, addressed to Turkey, the KDP and Iraq. The USA continues to work eagerly to forge a united front against the revolution, but the longer the resistance in Heftanin continues, the more hopeless the situation of Turkish fascism and its henchmen becomes. Already now, dozens of revolutionary youth have joined the resistance within the framework of the proclaimed general mobilisation and are streaming into the ranks of the guerrilla. Many other patriotic organisations have responded to the call of PKK Central Committee member Duran Kalkan and declared their readiness for common struggle, side by side with the guerrilla. The resistance of the guerrilla and the reactions of the civil society of Iraq and Kurdistan are making the plans of Turkish fascism and of the imperialists come to nothing.

Also in the domestic part of Turkey, in the hinterland of the fascist occupation war, the actions of the resistance escalated in June and July. With hundreds of attacks and resistance actions in the metropolises of Turkey and the cities of Northern Kurdistan, the bloody war was brought back to the heart of the beast and the deadly silence of fascism was broken. The fires that have been lit in the supposedly safe metropolises and tourist places of Turkey have exposed the lie of false peace and showed the world that Turkey is a country at war and that this war will not know any borders from now on. In addition to the revenge actions of the Children of Fire Initiative, which are mainly directed against targets of the Turkish war economy and against collaborators of the regime, the units of the YPS/YPS-Jin Civil Defence Units are developing the professional urban guerrilla warfare within the framework of their offensive that started in May. The militias of the People’ s United Revolutionary Movement of HBDH, the united front of the revolution of Kurdistan and Turkey, have also intensified the struggle with numerous successful military actions. Through the actions of the militias and revenge units, it was made clear once and for all this month that everyone who makes common cause with the fascist regime will be held accountable. Many fascist policemen, agents and collaborators were punished this month as targets of the militias and within the framework of the military operations in the cities. While the struggle in the metropolises and cities – as an important pillar of the Revolutionary People’s War – continues to be advanced, the guerrilla also showed a strong presence in Northern Kurdistan and successfully proved its capacity to strike everywhere and at any time with successful actions from Botan to remote areas like Dersim.

The civil society of Northern Kurdistan also awakened to new life especially last week and gave clear expression to its anger and hatred against Turkish colonialism. After the rapes and attacks by Turkish occupation soldiers and police against Kurdish young women and girls in Batman and Sirnex became known again, social protest broke out, despite the state of emergency and emergency laws, and thousands of people took to the streets. The recent rapes are by no means isolated cases, but must be seen as part of the occupation concept of Turkish fascism. In the person of the woman, the whole of Kurdistan’s society is to be broken and degraded. There is a system for these attacks and the jurisdiction of colonialism protects the perpetrators. Thus, the AKP-MHP regime is still trying to pass a new law which guarantees impunity to the perpetrators if they marry their underage victims after the rape. The recent protests have a new quality, because since the military suppression of the resistance of the self-administration in 2016, it is the first time, despite all repression, that there are mass protests in cities like Sirnex. The regime feels very clearly that the pressure continues to increase in all corners and ends and is therefore lashing out as if it had gone wild. In Northern Kurdistan and Turkey, mass arrests are still taking place every day, which have been directed, especially recently, against the organised structures of the women’s movement.

Externally, the regime is focusing on further expansion. For example, the regular Turkish armed forces in Libya have been massively increased and an active participation of Turkish forces in the coming battles for the city of Sirte is to be expected. According to the latest announcements by Al-Sisi, this could lead to a direct confrontation between Egyptian and Turkish forces. Turkish fascism has also intensified its engagement in Yemen. Thus, in the meantime, recruitment offices for Yemen have been opened in occupied territories such as Afrin, and the first hundred mercenaries have been flown out to the civil war country. Together with its allies of the Islamist Al-Islah party, Turkey is concentrating above all on controlling the strategically important coastline in order to be able to bring the strait between the Arabian Peninsula and Africa under its control in the long term. There are also signs of further Turkish interference in Sudan. The medium-term goal is to achieve with Libya, Sudan, Yemen etc. an encirclement of Egypt. Turkey’s concept remains the same as in Syria. The invasion takes place via mercenaries, gangs and their jihadist auxiliaries, and after some time regular troops of the Turkish army advance in order to annex the areas in the long term. The current negotiations about the fate of the liberated territories in North-East Syria cannot be understood in isolation from the regional balance of power due to this new conflict situation.

While the USA has given Turkey a free hand in Libya, similar to what it did before in Idlib, Russian imperialism tries to get the AKP-MHP regime back on its side with new promises in the Astana(/Nursultan) negotiations at the expense of the revolution of North-East Syria. The attitude of the three powers, Russia, Turkey and Iran, towards what they call the “illegal and illegitimate” self-government of North-East Syria could hardly have been clearer. Just as they did last time in September 2019, the Astana negotiations have brought no other result than the renewed sell-out of further areas of Syria. Under the name of protecting the sovereignty and territorial integrity of Syria, the three occupying powers are haggling over the division and the plundering of the country. Especially since the Astana summit, increased provocation and attacks by the enemy have been observed on the ground. The targeted assassination in Kobane, the drone attack in Dirbesiye and the recent artillery attacks on Qamislo, as well as the ongoing attacks in Ayn Issa and Til Temir, are all harbingers of another imminent Turkish invasion. Last week, the gangs of the self-designated National Army SNA declared their withdrawal from the urban areas in the occupied zone. Officially to guarantee security and stability and to place the areas under the control of the Free Syrian Police. However, it is a fact that thousands of Turkish soldiers from Northern Kurdistan have been sent to the occupied areas and the gangs are being withdrawn for one reason only, namely to be able to use them in a new ground offensive if necessary. Even though speculation is already boiling over as to the aim of a new Turkish invasion, it must be assumed that all liberated areas from Derik to Kobane and Shehba are in acute danger. The enemy is preparing for all eventualities and it can be expected that, similar to last year, the timing of the attack will depend on the developments in Southern Kurdistan. In order to compensate the own defeat and to be able to present new successes in the struggle against the revolutionary movement to the own followers, Turkish fascism will turn directly against the liberated areas of Rojava. The struggle between the revolution and Turkish fascism is gaining momentum day by day and is taking more and more a regional dimension.

The global resistance movement must know how to play its role in this context. As part of a global front against Turkish fascism, it is also necessary to increase the resistance in the imperialist metropolises to a maximum; that is, not to fight for an unconditional end of the war and for a peace without principles, but for the victory in the Revolutionary People’s War and the breakthrough of the revolution in the Middle East and the whole world.

Previous Post
Global Action Days 18th-19th July – Message from Rojava_en
Next Post
Geopolitical Evaluation of the Situation in Rojava, May 2020