After the attack on Afrin (2018) and Serekaniye (2019), Erdogan announced a new military offensive against the Self-Administered Territories of Northern and Eastern Syria (Rojava) 10 days ago. The goal is to expand the 30KM deep “security zone” south of the Turkish state border. The day before yesterday these attack plans were specified: The self-governed area of Sehba, directly adjacent to Afrin and north of Aleppo, with the city of Tel Rifaat and the multi-ethnic, majority Arab major city of Minbic, east of Kobane, were named as targets. Tel Rifaat is home to tens of thousands of people displaced from Afrin. Another Turkish attack means a major humanitarian catastrophe for the region and severe suffering for the population. It implies a definite ethnic cleansing and a consolidation of the Turkish settlement policy. Both areas have already been shelled massively with artillery in recent weeks. The day before yesterday alone, over 300 artillery shells were fired at the Sehba region. In Tel Rifaat, there have been a total of 7 drone attacks this year, yesterday a gynecology clinic was hit, and in total there have already been over 30 attacks with combat drones on the self-administered areas of northern Syria this year.

The two aforementioned areas are controlled exclusively by Russian forces, so Russia must agree to these attacks. Without an agreement with Russia, there will be no new major ground offensive with Turkish air force support.

For Turkey, these areas are of strategic importance to connect the areas already occupied in 2018 (Afrin) and 2019 (Serekaniye) and merge them into a contiguous controlled area. The trump card Erdogan holds in a possible agreement with Russia is the VETO against Finland/Sweden joining NATO. This could be the quid pro quo for a green light from Russia for a Turkish offensive. Russia is not expected to give up all territories to Turkey immediately, so Erdogan is now not talking about a general 30KM deep zone, but naming two specific areas. If Russia were to give up Kobane as well, where they are also the protecting power, they would have little bargaining power in hand to sow dissent within NATO later. The question, however, is not if, but when the Turkish army’s renewed major offensive will begin. In the long term, Erdogan wants to occupy the entire border strip with Turkey in northern Syria. It remains to be seen how the U.S., as another protective power in Rojava (eastern areas) will behave. Yesterday, the U.S. Ambassador to Turkey and the U.S. Secretary of State Blinken made it exceptionally clear that they reject a renewed Turkish offensive in northern Syria. This shows that they fear a deal between Turkey and Russia and are concerned about the benefits to Russia. Perhaps they will position themselves to offer Erdogan parts of the areas they control east of Til Temir as a protective force to prevent a deal with Russia with Turkey. Turkey is increasingly and confidently representing its own interests as a major power in the Middle East. Military successes in Libya, Syria, Iraq, and Mount Karabakh have made Erdogan a factor in his own right in the region and beyond. Turkey has become a drone power. The Turkish-made TB2 drone has been a key contributor to the difficult course of the war from Russia’s perspective in Ukraine. And Erdogan needs this renewed war for domestic political purposes:

Inflation remains high, the lira weak, the economy in deep crisis. Elections are coming up in Turkey. With a renewed offensive on northern Syria and the accompanying nationalist mobilization, Erdogan is trying to unify Turkey and rally behind him. War for votes, securing rule through brutal repression and occupation of foreign lands. Since April 2022, the Turkish army has been attacking the Kurdish guerrilla areas, the so-called Medya defense areas, in northern Iraq/Southern Kurdistan with aircraft, drones, helicopters, howitzers and dropping ground troops in violation of international law. Despite the massive deployment of forces and the use of banned chemical weapons, the Turkish army is making slow progress against the guerrillas, who are well prepared with mountain positions, and there are casualties on the side of the Turkish army. Erdogan therefore urgently needs a success in the war against the greatest democratic threat to his rule: the Kurdish liberation, women’s and democracy movements.

The contradictions between the imperial superpowers Russia and the USA (NATO) are also an opportunity for Rojava to gain diplomatic leeway. The self-government of Rojava has now addressed the world public with its own proposals, which have so far met with little media response. The self-government has proposed a security compromise and the deployment of peacekeeping forces to northern Syria.

Turkish preparations for war are likely mostly complete. This will be the first Turkish offensive that does not originate on Turkish soil. Neither Sehba nor Minbic directly border Turkish territory. In Sehba, the SDF has been preparing for war for years; it should be well prepared. The area is very hilly. Minbic is a large city with many tall buildings and the SDF are battle-hardened in house-to-house combat in Minbic, through the urban battle against IS in 2016. Turkey has never attacked such a large city in Rojava. The SDF will certainly be ready to defend Rojava sacrificially against another large-scale attack.

During the last two days Turkish Foreign-minister & Minister of Defence met with their Russian counter parts. Among other topics Turkeys plans to invade further territories of Autonomous Administration of North- and East Syria were discussed. Russian Foreign-minister Lavrov said that Russia is ”well aware of the concerns of our friends (Turkey) about the threats posed on their borders by external forces, including by feeding separatist sentiments on the illegally controlled US units in Syria” indicating that Russia may greenlight Turkeys plans to take further steps to occupy a 30 kilometer deep zone in North- and Eastern Syria. Turkey announced recently that they completed preparations to invade the SDF held areas of Shehba and Tel Rifaat as well as the city of Minbic. Regions with a significant presence of Russian military.

Furthermore Turkish officials stated that Turkey has set up military councils responsible for the upcoming invasion which consist of high-ranked members of their Islamist mercenaries familiar with the regions. In the next days further meetings between Turkish & Russian officials are likely to take place. As of right know the information available indicate that a Turkish attack can be launched anytime now.

We, as the RiseUp4Rojava campaign, condemn Turkish fascism’s aggression which is a threat to all people of the region. We condemn the geopolitical games being played by imperialist NATO as well as Russian Imperialism.

We call on all democrats, antifascists, feminists, the ecological movement and anti-war activists to prepare themselves for Day X; the day of a invasion by Turkey on Rojava and the Autonomous Administration of North- and Eastern Syria. In case of an attack we will give the signal to start acting. To give a proper answer to an attack we have to prepare now and be ready to Block, Disturb & Occupy the supporters of Turkish Fascism and to defend the achievements of the Revolution! 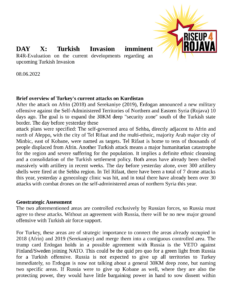 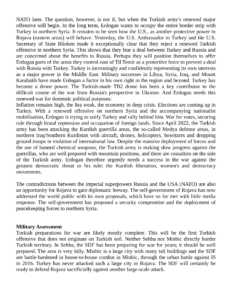 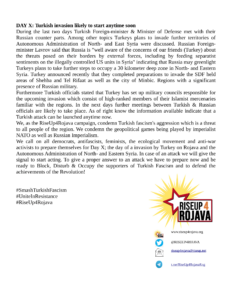