We oppose the repression against revolutionary internationalists! Statement from Riseup4Rojava about the hungerstrike of Florian

Florian (Libre Flot) has been in custody in France since December 8, 2020. That day nine people were arrested in different places in France. Seven of them were indicted with the charge of “participation in a terrorist association to commit crimes against persons”. Two people were released directly under judicial supervision and five were sent to detention.    After several months, they were all released with one exception: Florian.

He is accused of having been active in a “criminal organization”. On the grounds that he fought against Daesh as a volunteer in the ranks of the People’s Defense Units of Rojava (YPG, Yekîneyên Parastina Gel), he is detained under strict isolation conditions. Against these inhumane measures of the French prison system, Florian went on hunger strike on February 27, resolutely resisting the methods of the French state. In recent days he has been sent to the prison hospital.

As he explains in the letter announcing the beginning of his hunger strike: “The National Anti-Terrorist Prosecutor’s Office and the investigating judge are constantly trying to instill confusion and create an amalgam with Islamist terrorists, even though they know full well that I fought against the Islamic State, notably during the liberation of Raqqa, where the attacks of November 13 were planned.”

The imperialist and capitalist states are afraid of the revolution in Rojava – of its worldwide expansion and the hope it brings for anti-fascist and revolutionary forces everywhere:

In times of global crisis of capitalism and imperialistic, only a global front against exploitation and fascism based on common values and solidarity with each other will bring an end to this system.

They are afraid this hope will spread worldwide and a new wave of internationalism and worldwide solidarity spread with it. That is why the capitalist European states of especially are resorting to every method of isolation, exclusion, criminalization; in order to stifle this hope.

Activists have had their passports revoked, as recently happened in Germany, have been banned from the Schengen area, as was a media activist from Great Britain, or expelled from the country as “dangerous foreigners,” as the German state did most recently with the activist Maria. In France recently two organisations in solidarity with Palestine (Palestine Vaincra) and GAL (groupe antifasciste Lyion et environt) have been proscribed. This clearly shows a tendency across the European states of counterrevolution in general.

These attempts of isolation, intimidation and criminalization as “terrorists” against internationalists is a continuation of the repression long used by the capitalist states against the Kurdish movement itself. The struggle for a free Kurdistan, for a free society, against Turkish fascism and against the Islamist gangs of the so-called ISIS is criminalized and exposed to fierce persecution.

Meanwhile, the European states are supporting the policy of Turkish fascism, in the form of weapons and economic cooperation and with heavy repression against Kurdish and internationalist activists who support the freedom movement. The French state, which has intensified its actions against the Kurdish youth movement in recent years and whose companies are involved in various arms projects with Turkish fascism, is becoming a willing accomplice of the fascist regime in Ankara.

While volunteers who fight on the side of Ukraine against the Russian invasion are, at least for now, still accepted and acclaimed by European social media and public opinion, those who lead the anti-fascist struggle against ISIS and Turkish fascism are exposed to repression. While the first are considered useful for acting in the frame of current EU and NATO interests, the second are fighting for revolution and a real system change. They also fight Turkish fascism, which plays an important role in the NATO plans for crushing the revolution in Kurdistan and consolidating the capitalist system in the Middle East.

Florian makes a determined resistance with his hunger strike, he defends his dignity and the dignity of all people, the dignity of humanity, who fight for a liberated society!

We as Riseup4Rojava campaign support the demand for his release and send him warmest and fighting greetings to the dungeons of the system! 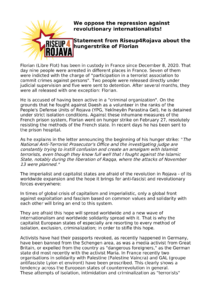 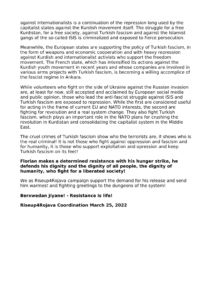