We stand with the democratic society! RiseUp4Rojava’s perspectives on the Russian invasion of Ukraine

With our roots in the movement that built Rojava we stand firmly in solidarity with those who make up what Rêber Apo would define as “the democratic society”, or “the moral and political society”. These are the parts of society that resist the racist, patriarchal and state attacks made by capitalist modernity to homogenize the different peoples within our communities. The solidarity between the peoples that compose democratic society is one of the main pillars that built the Rojava revolution, as is self defense. If one’s community, the place where you have your roots and life is under attack, the democratic society has the right of self defense. This is paramount for our movement.

As such, we stand with comrades such as Rev Dia and the Resistance Committees who are defending their communities against the onslaught of the Russian nation state and its war machine in Ukraine. We support them in their struggle against the military aggression today, as well as their fight against fascist street gangs – yesterday and tomorrow.

To stand with democratic society also means to stand with the people in Russia who rise up against the imperialist war, who protest in the face of massive repression from the Russian state. Especially in times of war propaganda, both in Russia and in the Western states, it is our duty to support the people who fight for the solidarity of the democratic society everywhere.

Our task is to rise up against the imperialist powers who wage wars and to insist on the right to self-defense of the moral and political society in Ukraine, as well as anywhere else!​​​​​​​

The nation state has it’s own logic which is not the same as the peoples’. We remember how the Ukrainian nation state was the one that saved the Turkish drone program when the world stopped their exports of essential parts in 2019. We know that the Turkish-Ukrainian “Black Sea-shield” cooperation resupplied motors for the TB2-drone that to this day is able to kill our comrades, politicians and civilians in Kurdistan en masse. These kinds of ‘cooperation’, just like the imperialist tools used by NATO or CSTO, are deployed to the detriment of the democratic society globally. It is in the make-up of the nation states who form the organizational basis of capitalist modernity.

This position, to not stand with the nation state but with the peoples of the democratic society regardless of borders – be it in Ukraine, Russia, Kurdistan or Chiapas – is one that needs to take precedence in our analysis of this and other conflicts. It shows us a path towards a future without slaughter in the name of capitalist countries – one that is instead in the name of peace, freedom and solidarity. It connects our struggles to a common one against the capitalist modernity and the power games of imperialist forces.

In this regard we share many of the views put forward in the statement by our friends in the Zapatista movement. Please read it to get a deeper understanding of this type of analysis:
https://www.anarchistfederation.net/there-will-be-no-landscape-after-the-battle-on-the-invasion-of-the-russian-army-into-ukraine/

To directly support our friends resisting in Ukraine you can use PayPal:
RevDia – [email protected]
The Resistance Commitee – https://www.paypal.com/donate/?hosted_button_id=Q2K9RMBVVJMN4 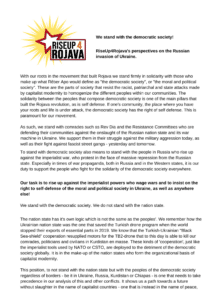 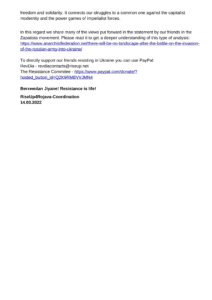