Call for Actions against the intensified attacks of Turkish fascism Against the Rojava revolution!

Just one day after the Syrian Democratic Forces announced their victory over Islamic State gangs in Hasakah, dozens of Turkish Air Force fighter jets simultaneously bombed targets in Rojava, Sengal and the Maxmur refugee camp on the evening of 1st February. The attacks, which began at 10 p.m. local time, lasted a total of three hours and hit villages in the Derik region, the Sengal Mountains as well as the city of Xanesor, the self-administered refugee camp Maxmur and its surroundings. The propaganda of Turkish fascism celebrated the bombings already on the same day under the name of “Winter Eagle Air Operation”.
On February 2 and 3, Turkish troops shelled villages in the Dêrik region with artillery and mortars. The Dêrik region has been a region where few attacks have taken place so far.
On February third, positions of the Syrian Democratic Forces were attacked near Dirbesiye and a vehicle was bombed by Turkish combat drones.
Attacks are also taking place on a daily basis near Tel Temir, Sheba and Ain Issa.
We expect these attacks to continue on a high intensity level.

It is not a coincidence that the attacks take place exactly at this time, but they are the latest aggravation of the development of the past months. Since last autumn, the fascist AKP-MHP regime never tires of threatening to invade the liberated areas of the Democratic Federation again and again, terrorizing the civilian population with
indiscriminate artillery shelling and frontline raids, and assassinating, self-government workers, youth movement activists and anyone who clearly positions themselves on the side of the revolution with targeted and underhanded drone attacks.

The attacks of Turkish fascism are, above all, a direct reaction to the defeat of their Islamist gangs in Hasakah, where the organized and armed population of northeastern Syria, its defense and security forces, succeeded once again in defeating the terrorists of the Islamic State after a week of fierce and sacrificial fighting. The attack in Hasakah,
which began on January 20, the fourth anniversary of the Turkish assault on Afrin in 2018, aimed not only to free some detained Islamists, but to bring the entire area between Hasakah, Deir-az-Zor and Raqqa under control and to announce once again the establishment of the Khalifate, which was crushed in 2019.

The support of the Islamist gangs by the Turkish state pursues the goal to destroy the self-administrations in North-East Syria and Şengal. Turkish fascism cannot afford to tolerate democratic confederalism and multi-ethnic coexistence right in front of its own border. It challenges its fascist rule and racism too much.

The recent intensification of attacks on Rojava, Şengal and Maxmur are part of a long-term strategy to crush the Kurdish freedom movement by 2023. Turkish fascism is extending its attacks to regions such as Dêrik, which have been little affected by the war in north-eastern Syria.

This is where we have to start, the forces of capital and power are internationally interconnected and the imperialist states are in a common war against society.Therefore, our resistance is an international resistance, we have to mark, block and call to account the supporters and collaborators in our countries, in our states.
Block the arms industry, the investment banks and funds that invest in the Turkish economy.

It is our obligation as international democratic forces to act resolutely against the attacks of Turkish fascism and to form an international front against it!

The Revolution in Rojava will live! The Turkish Fascism will get smashed! 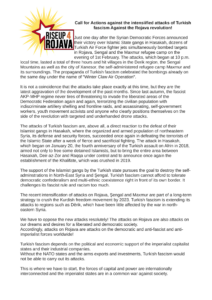 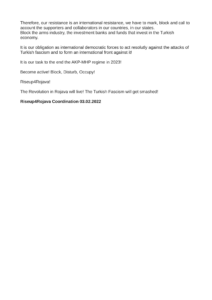 Previous Post
Call for actions against the latest attacks on the revolution in Rojava: Unmask the alliance of Turkish fascism with the IS jihadists!
Next Post
We stand with the democratic society! RiseUp4Rojava’s perspectives on the Russian invasion of Ukraine

Call by BTA16 & #RiseupforRojava for first ever action against Turkey's attacks on Rojava in Sao Paulo, #Brazil!

🎥A message from #YPJ internationalist to the world

Call by BTA16 & #RiseupforRojava for first ever action against Turkey's attacks on Rojava in Sao Paulo, #Brazil!

🎥A message from #YPJ internationalist to the world