We will #RiseUp4Revolution worldwide until the system is falling!

On 18th & 19th of July we were RisingUp4Revolution worldwide!

We will RiseUp4Revolution worldwide until the system is falling!

We, as Women Defend Rojava, Make Rojava Green Again, the Internationalist Commune of Rojava and RiseUp4Rojava, are sending greetings to every person and every organisation who took part in the past action days around 18th & 19th of July. The ways of protesting and showing solidarity were different from one another. This diversity and this effort in thinking is the best way to share our message and is something that we want to especially stress. Of course, we know that we will continue and intensify our actions in the next calls that will certainly come.

We know the enemy is everywhere, even inside ourselves, we know the mass media of the system and the states are trying to impose the topics that people have to talk and worry about, this is a way of special warfare. But, in October and November 2019 for instance, we reached to impose to the public opinion the discussion about the situation in Rojava/North-East Syria. Now, on the 8th anniversary of the Rojava Revolution, calling at the same time to remember the Nicaraguan and Spanish Revolution, we, together, reached to put again the Turkish attacks against the biggest revolution of the 21st century as a topic on the agenda. We also showed that the revolution of North-East Syria is not disconnected in an ideological way from the developments in the Free Mountains of Kurdistan, which are also under intensified Turkish occupation attacks since mid-June 2020. The Rojava Revolution is also connected to the whole world, for example through internationalist friends coming, by being connected with other revolutionary organisations, not only looking at Kurdistan and North-East Syria for ways of learning – through the common experience of revolutionary history that made this revolution possible – but also supporting and finding ways of further organising.

We showed that we, as the global resistance movement, stand with the Kurdish people and the revolutionary forces also outside of Syria, in the whole Middle East and in the whole world. We showed that our struggle is international and that an attack on one of us is an attack on all of us. For example, we also showed and received solidarity from friends in Portland, one of the centers of the resistance in the United States now, from Indonesia, during the protests against the OmnibusLaw, from Brazil, where peoples are facing the fascist regime of Bolsonaro. All of these actions and messages come from the understanding that the Rojava revolution is one of the places where democratic modernity is clashing with capitalist modernity and we are taking advantage from these clashes. Democratic movements all over the world, individuals and organisations showed the understanding of making the revolution also their own, and that North-East Syria is, nowadays, one of the main places where attacks against the global revolution are taking place. So, the ongoing resistance here is the resistance of the global resistance movement. Especially, we showed how the vanguard of women is needed for a successful movement. As history shows and the present revolutions from Chiapas in Mexico, the Naxalits in India and the New People’s Army in Philippines, to Kurdistan prove today: there is no revolution without women. Women’s liberation has to be the basis of our revolution and together with the youth the vanguard of it as well as in building up a democratic and free society. Also, these days, the women autonomous organisations all over the world played a main role in the success of our common call.

In Europe, Oceania, America, Africa and Asia people were rising up, sending a clear message: we stand together against fascism. We know fascism is created and founded by capitalist modernity, fascism is the tool used by the system to survive when people are rising up for revolution. That’s why, now, fascism is increasing all over the world. Turkey is one of the most brutal and clear expressions of fascism: Turkey is the tool of the imperialist, capitalist and patriarchal system to avoid the spreading of the revolution of North-East Syria to the world. The aim of the global system is to break the resistance in Syria, Kurdistan and the Middle East through the Turkish fascist state, and that’s why we focus on attacking them and their interests. But fascism is everywhere and we are showing and will continue to show that we’re able to attack it everywhere and in different ways. At the same time, we are building up an alternative and show that an other life is possible and that we will defend this and ourselves against the attacks by fascism.

Therefore, this struggle against fascism, against colonialism, against patriarchy, for a global revolution that will, in the end, break the capitalist modernity by building up a new system based on women liberation, radical democracy and social ecology. We need to continue after these action days: We are in the beginning of the end of the capitalist era, we are following the steps of democratic modernity.

We call upon every person, upon every organisation, upon every collective, to increase the struggle. To follow the revolutionary line of democratic modernity, to keep in touch with the North-East Syrian revolution, to go deeper into concepts as women liberation, internationalism and democratic nation. We call on all to continue our resistance in the local and global level and to defend with all our strength the global revolution. We call upon everyone to take the hope of Kurdish, Arab, Assyrian, Armenian peoples in North-East Syria, make the hope your own; the hope that another world is possible, that we can defeat the nation-states and live in a democratic way.

The friends’ speeches all over the world clearly follow this line. As activists in New York said:

“It’s the same system that is oppressing people all around the globe, therefore our answer has to be global”

Friends were clearly calling to build real internationalism. Also, in Buenos Aires, in an online seminar organised by Kongra Star, the women’s movement of Rojava, one friend was making the role of women in revolutionary struggle clear, against what the system is trying to impose on women worldwide:

“The situation in every country has to be changed, we see nowadays all around the world, women are taking the lead to create a free world. In every place the patriarchal system tries to diminish our role in society. But we will never look down anymore. As the women movement shows in Rojava: We can change the system”.

In Germany activists talked in this way:

“The Kurdish freedom struggle stands for building a society beyond capitalist modernity. Beyond the destruction of the natural foundations of this earth and towards a need-oriented society. The friends in Kurdistan fight for the preservation of their freedom based on society’s property”.

This stresses that also the ecological struggle can’t be separated from overcoming capitalist modernity and therefore has to be part of the revolutionary movement.

We should know we are not small. We were in more than 100 cities in more than 30 countries. A lot is against us: the media remains silent about the occupation attacks of Turkey on the Free Mountains of Kurdistan, in Libya, in Rojava and in other places; the Coronavirus-pandemic is used as a humanitarian crisis by states for making people dependent and afraid, with the aim of furthering the interests of social control and economic benefits for the few. Even in this situation, we were strongly rising up, knowing that we can still increase our potential and level of action. We should keep improving and put even more effort to strengthen our resistance and organisation.

We have to see and take our role in order to continue and improve our struggle worldwide to defeat capitalism and patriarchy, to create a free life because the example of Rojava shows us that another world is possible.

With our struggles we will end capitalism, overcome patriarchy and smash fascism! From the Middle East and all around the world we will continue our fight and create the world which we have in our minds and our hearts.

The revolution in the Middle East, and all around the world will win – fascism will be crushed.

As our friends in the Spanish revolution of 1936 said, ¡No pasarán!

From the international campaigns Women Defend Rojava, Make Rojava Green Again, and RiseUp4Rojava, and the Internationalist Commune of Rojava; to all organisations, collectives and individuals who participated in global action days #RiseUp4Revolution on 18th & 19th July 2020. 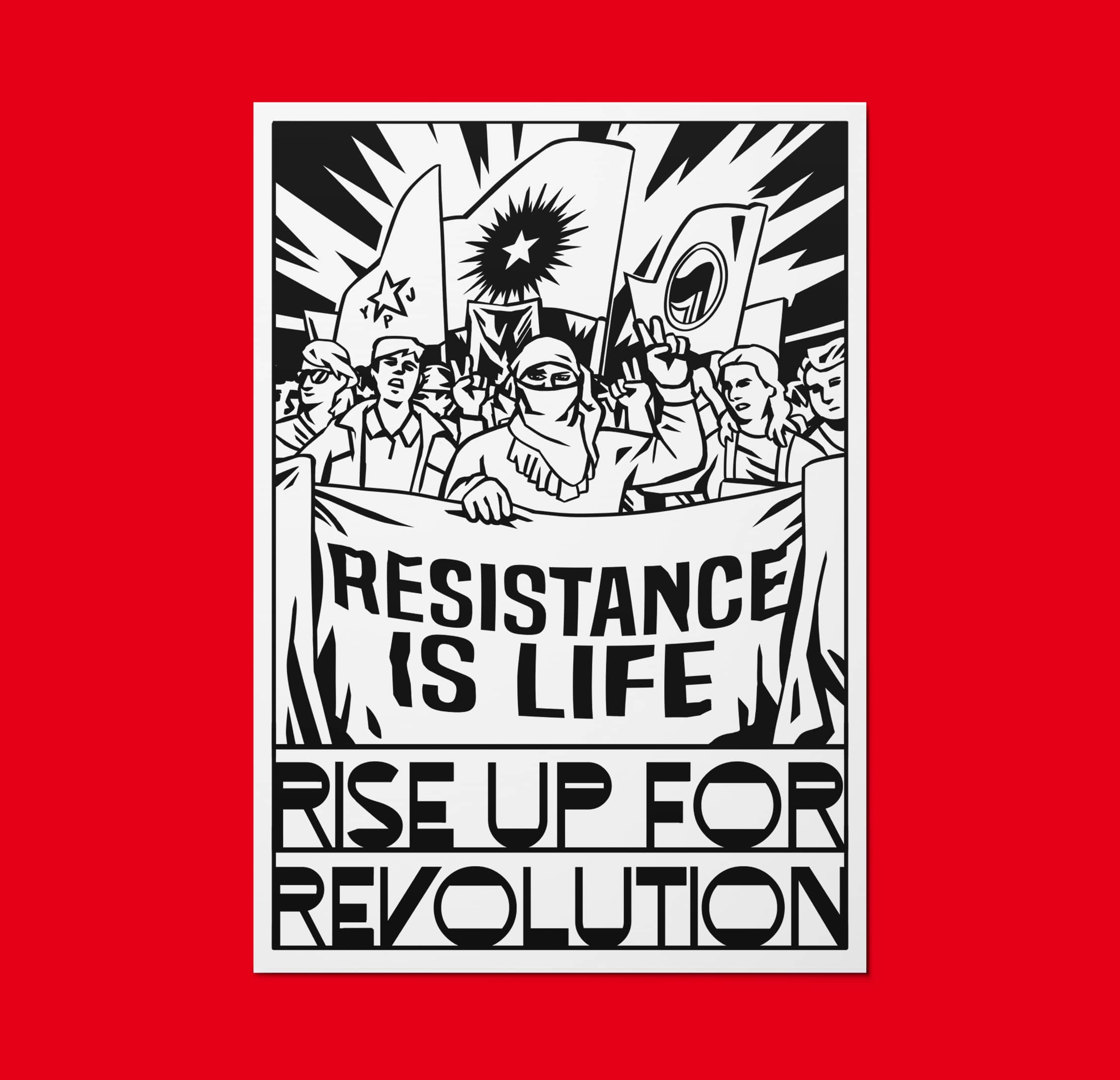 Call for actions against the latest attacks on the revolution in Rojava: Unmask the alliance of Turkish fascism with the IS jihadists!
OPCW Action – RiseUp4Rojava solidarity statement with the 55 comrades of the Kurdish Youth Movement
Securitas Turkey and collaboration with fascism
No War in Northern Syria – Day X Mobilisation
© 2019 #riseup4rojava - smash turkish fascism.