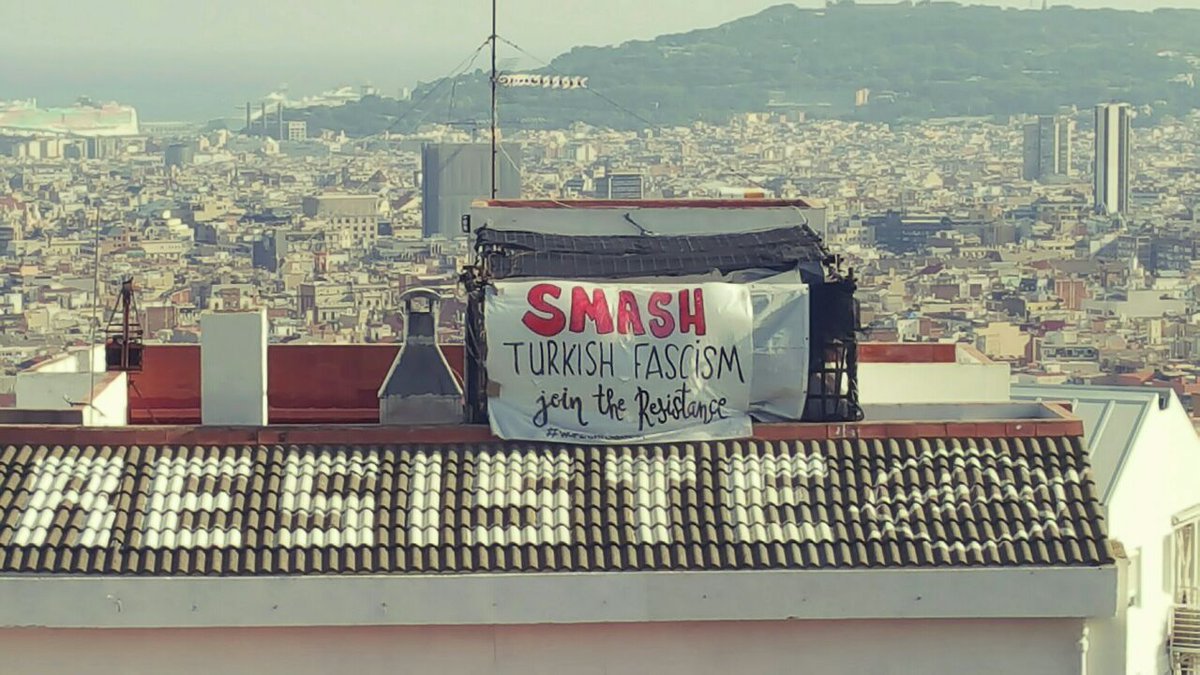 On 15thAugust, we, as internationalists from all over the world, launch our renewed offensive against the fascist Turkish state and its henchmen with the stated goal of further stopping the war machinery and revenues for the fascist Turkish military and state! We will go into permanent resistance by blocking, disrupting, occupying all the places of cooperating with Turkish fascism in our contexts!

Our common work and international offensives so far have shown that we can cause huge damages to the Turkish fascist state and the war machinery by focusing on physical targets of Turkish interest in our countries, putting our common strength together. By our popular demand, the Turkish arms industry has been forced into a deep crisis. For example, the export of armored steel to several Turkish companies has been halted (e.g. Otokar, Roketsan, BMC), and the development of the ‘Altay’ tanks, ‘TFX’ jets and acquisition of new ‘ATAK’ helicopters could not go ahead due to the non-availability of engines.

The examples are countless – an international front against Turkish fascism DOES make a difference, YOUR participation makes a difference!

The cooperation of our countries, however, with the fascist Turkish state has by no means stopped, and Turkish war crimes and occupations continue with the support of companies, banks, and other entities at our doorsteps! Old contracts are being kept up; others are being renewed; tourism continues to finance Turkish war crimes; know-how is being transferred, so Turkey can produce armored steel themselves. Thus, we increase our permanent resistance against the targets we already identified and damaged in the past, such as Rheinmetall, Airbus, Credit Suisse, ThyssenKrupp, Lockheed Martin, Boeing, BAE systems, Rolls Royce, Leonardo in the weapons industries (see here for more) and with Turkish Airlines, Pegasus, TUI, SunExpress in the tourism sector.

We will also focus in our renewed offensive, gathering also our common strength onto new targets. Era-Min, financed by the EU ‘Horizon 2020 research and innovative program’, is a central target. It is a multinational cooperation, researching around metallic raw materials and industry, enabling Turkey to produce armored steel domestically. The Turkish state research agency participating in ERA-MIN is TÜBİTAK, already being heavily criticised by purging scientists not agreeing with the fascist AKP-MHP regime. All the research organisations that are part of ERA-MIN and are to be targeted can be found on the website.

Our analysis is that we make the most impact when we act in coordination, hitting the same targets

from many different places at the same time. Thus we have devised a list of targets in this call to prioritise our focus on. Apart from targeting ERA-MIN, OYAK, amongst others, we also call to Boycott Turkey and for the global network to join other calls as part of the R4R-network against the cooperation with Turkish fascism and the war machinery. One such call is proposed by Rheinmetall entwaffnen on 28th August to block the war industry in Kassel, Germany. If it is not possible to come to Germany, get active against Rheinmetall elsewhere, or against any other other of the targets of the weapons industry, detailed with locations HERE!

On 15th August 1984, PKK partisan units stormed police and military bases in the small Kurdish towns of Eruh and Semzinan in occupied Northern Kurdistan. The armed propaganda units proclaim with their action the beginning of the guerrilla war and the foundation of the Liberation Forces of Kurdistan (HRK). The guerrilla offensive represents a turning point and a decisive response against the then widespread hopelessness, capitulation and subjugation to fascism. With their shots, the liberation forces succeeded in breaking the deadly silence, resulting from the fascist coup of 12th September 1980 – after which every opposition voice was brutally silenced and the revolutionary forces were either crushed or sought refuge in exile – and opened a new phase of the revolutionary struggle.

What began as the determined action of a small group soon turned into the struggle of millions. From the mass uprisings in the 1990s, the achievements in the field of democratic politics to the revolution of Rojava – all these are unthinkable without the offensive of 15th August. 15th August is more than just an ordinary anniversary and a day of remembrance; 15th August is the starting point of the now groundbreaking revolutionary process in the region.

The achievements that have been fought for in the past 36 years of armed struggle, with the greatest efforts and the heaviest sacrifices, are now facing an existential threat. The fascist AKP-MHP regime is waging a merciless war of annihilation against the Kurdish people and the democratic-revolutionary forces of the region. The attacks on the political will of the Kurdish people in Northern Kurdistan and Turkey, the mass arrests and forced administration, the war of aggression and invasion in North-East Syria and the occupation policies of the fascist Turkish state in Southern Kurdistan are all part of one and the same concept. With the occupation operation against North-East Syria in October 2019 and the invasion in Haftanin in Northern Iraq, which continues to be carried out with all severity, the conflict between the forces of fascism and revolution has reached a new level. Without the technological, military, financial, political and diplomatic cooperation of the opportunist and imperialist governments, especially of the USA, Western European, and other states, with the fascist AKP-MHP regime the attacks against the revolution are not possible.

Therefore, as anti-fascist and revolutionary forces we will be in permanent resistance and – through occupation, blockade and disruption – take action against all the places of military, diplomatic and economic cooperation for Turkish fascism in our countries and around the globe.

NOW is the time to get active, to defend the revolution,

The revolution in the Middle East, and all around the world will win – fascism will be crushed.

Call: International Week of Solidarity and Action, 1st – 8th November 2020
Brochure: How to recognise a war when you see one
Message from Switzerland, #Fight4Rojava: 15th August 2020 – 36 years of armed struggle of PKK in Kurdistan
Evaluation of the current political-military situation, 11th August 2020
© 2019 #riseup4rojava - smash turkish fascism.