From Kobanê to the World: Rise Up against Fascism

Come out for the international action week from

World Kobanê Day and the revolution in Rojava

On 1st November 2014, millions of people around the world took to the streets to express their solidarity with the heroic resistance of Kobanê. Millions of women and men, old and young, progressive people of different political colours, united in their diversity, stood resolutely at the side of the people of Rojava and testified their support in the fight against the barbarity of the murder gangs of the Islamic State. The world held its breath and watched attentively as the fighters of the Women’s and People’s Protection units, YPJ and YPG, stood in the way of the darkness, and defended humanity house by house, street by street, in Kobanê.

With the resistance of Kobanê, which was to become the beginning of the end of the self-proclaimed caliphate, a global movement of solidarity, resistance and common struggle began to grow, which today organises itself across all borders and defends its hope. The revolution of Rojava became the hope and inspiration for people and struggles worldwide, because then as now, there is more defended in Rojava than just the land, the cities and the villages. With the Autonomous Self-Administration, the societies of Northern Syria created a living example of a free and democratic future for the Middle East, beyond local despotism and foreign domination. On the basis of the equal coexistence of all residing population groups, the liberation of women, an ecological and needs-oriented way of life and economy, and an unprecedented form of radical democracy, an alternative system to solve the crisis is flourishing in Northern Syria, amidst the chaos, destruction and suffering of war.

With its radical approaches to solving existing social problems, the revolution of Rojava already shines far beyond the borders of the Middle East. At a time when people all over the world are searching for new solutions and a way out of the abyss into which the capitalist system has steered humanity, the people of North-East Syria are providing very practical answers to the major human questions of our age.

Whether against feminicide and violence against women, to stop the ongoing destruction and unlimited plundering of our natural environment, against state murders and racist police violence, or to stop the global advance of fascism – all over the world, hundreds of thousands, millions of people take to the streets to express their anger and dissatisfaction. At all ends of the world, resistance is stirring against a system that has kept humanity and nature under its yoke for too long. The revolution in Rojava/Northern Syria only acquires its real meaning against this background. In spite of all adversities and obstacles, during the war and in the times of the Corona pandemic, the people there are building their own alternative day by day and are giving practical proof that another world is possible. A life beyond state oppression and capitalist exploitation, self-governing and free, has already become a living reality step by step. Thus, the Rojava revolution in Northern Syria embodies the hope for a dignified, just and free life in the 21st century.

The self-administration of the peoples is, however, a thorn in the side of the rulers of the region and the imperialist powers who are trying to reshape the Middle East according to their interests. With an embargo from all sides, political and diplomatic exclusion, and a broad concept of psychological warfare, there is a deliberate attempt to plunge the liberated territories and the movement into crisis and deprive them of their autonomy. The fascist Turkish state, under the leadership of the dictator Erdogan, attacks the revolution in Kurdistan, whether in Turkey, Syria or Iraq, with all severity and brutality. Since 2016, the Turkish occupying army, together with its Islamist allies, has repeatedly invaded the liberated areas and since then has occupied large parts of Northern Syria from Efrin to Serekaniye. But the attacks of Turkish fascism are not limited to Northern Syria. The regime in Ankara strikes wherever people in the region strive to build a free life under their own leadership.

Also, in the North of Iraq, in Southern Kurdistan, the Turkish occupiers have been trying to gain a foothold for many years and started a large-scale attack against the region of Heftanin in June this year. Guerrilla forces of the Kurdistan Workers’ Party, PKK, have since then offered fierce resistance to stop the invaders and to defend the areas of Southern Kurdistan. The self-organised refugee camp Mexmur in Northern Iraq and the Shengal Mountains, where the Yezidi people have taken their own lives into their own hands since the liberation from the henchmen of the Islamic state and have established self-administration based on the model of North-Eastern Syria, are also the target of Turkish air attacks almost every week. The goal of the fascist Turkish state is not the occupation of a single region, but the destruction of the revolution and the smashing of the hope for freedom.

Turkish fascism is a global threat – it must be confronted globally

The war of occupation that they have unleashed against the peoples of the region under the hypocritical name of the “fight against terrorism” would be unthinkable without the political, economic and military support that the Turkish Republic receives from its partners, from NATO to the Russian Federation. Without the support from outside, the billions of financial aid from the European Union, without the weapon systems from Germany, Italy, USA and many other countries, and without the political legitimisation that Turkish fascism receives from its allies, this regime would have fallen long ago. In Turkey, Kurdistan, Syria, Iraq, Libya, the Mediterranean and elsewhere – it is the same picture: The fascist system, which today not only keeps the Kurdish people and the peoples of Turkey in captivity, but has increasingly become a threat to the whole region, is only kept alive by worldwide support and therefore has to be fought internationally.

The backers and supporters of the war against the revolution, those who enrich themselves by their massacres and atrocities and those who legitimise their raids are sitting in the safe hinterland and are profiting from the murders. It is time to call those responsible by name and hold them accountable.

Worldwide for a better future: Rise Up against Fascism

We will no longer watch as they try to stifle our hope, and we call for a week of international resistance between 1st – 8th November. We know that the struggle against fascism and for another world can only be won by united struggle.

Let’s express together our solidarity with the fighting people of Rojava and take to the streets on 1stNovember, the World Kobanê Day!

From 2nd – 5th November, let us together highlight the struggles and goals that unite us and move us globally, and that strengthen the common alliance in our diversity.

Let us together, from 6th to 8th November, disturb – blockade – occupy in a decentralised way the places of international cooperation and support of the Turkish state.

We call, therefore, for a week of solidarity, a week of strengthening the antifascist struggle globally, a week of civil disobedience against fascist rule, capitalist exploitation and imperialist devastation of our livelihoods!

Rise Up 4 Rojava! – Rise Up against Fascism! 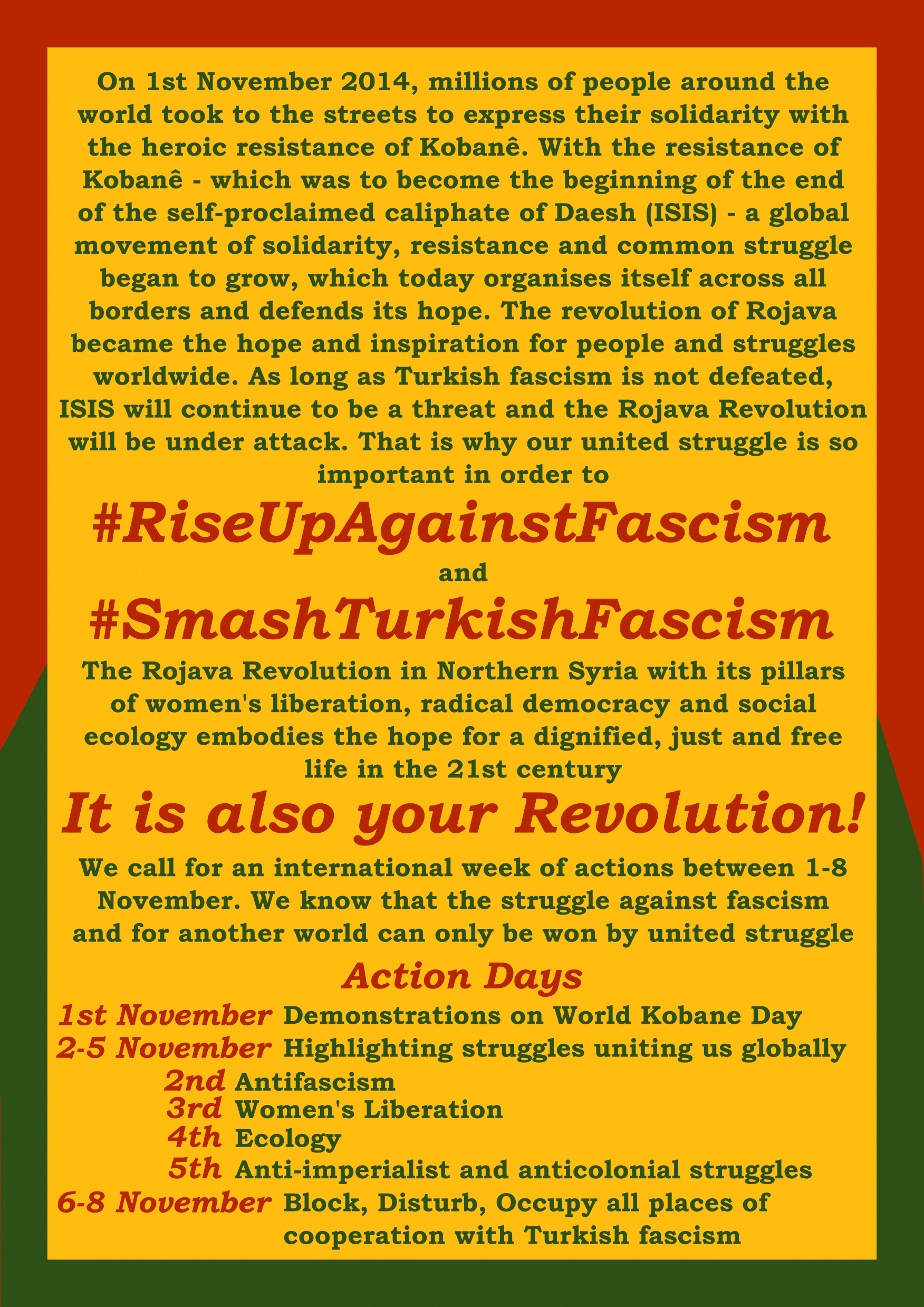 Previous Post
Brochure: How to recognise a war when you see one
Next Post
Current political-military evaluation, 30th September 2020