DAY-X IS NOW! Take action immediately: Together we #RiseUp4Rojava!

To all friends of Rojava, to the press and public:

On the night from the 19th to the 20th of November the turkish fascist state started a new operation against the liberated lands of Rojava, North-Eastern Syria and Southern Kurdistan. With a massive air-operation, the cities and regions of Kobane, Derik, Sehba, Minbic, Zirgan/Dirbesiye and Til Temir were bombed. In Southern Kurdistan, Gare and Qendil in the Medya Defence Zones were also bombed by turkish warplanes. The attacks are continuing right now and the fascist boss of the turkish regime, Erdogan, is threatening the region with destruction, extinction and murder to be able to stay in power and to win next years upcoming elections in Turkey. Since the beginning of this year, Rojava has been confronted with continuous attacks, while at the same time, in the mountains of Southern Kurdistan, the turkish army has been using chemical-gas on a daily basis against the resisting guerrilla. #WeSeeYourCrimes and we do not stay silent! The last attacks show another escalation on the ground and have to be understood as a preparation for another invasion. This why we say: “DayX is Now“ and we call on everybody to act according to that!

It has been more than a year now that we renewed our “DayX – Concept“ and according to that we called upon everybody to prepare for this day. For us it was always clear, that the DayX concept only works for certain scenarios, but what if the enemies of our struggle, what if the turkish state doesn’t act according to those scenarios? For more than 3 years now Rojava has been under attack on a daily basis: Drone and airstrikes, artillery shelling, local and regional offensives by the turkish-backed SNA, cutting off water, destroying infrastructure, through embargo and political isolation, etc. 2022 has especially been a year characterized by this. The international hegemonic powers, such as the USA and Russia, both have given a green light to Turkey to do whatever it wants to do. According to the reality on the ground in Rojava, we have come to the conclusion that continuing to wait for “DayX“ will throw us more and more into passivity and will make us not able to react as needed. We need to be very clear about this: Rojava is at war! Rojava is under attack! This is why we need to see that DayX is Now!

We also see that at the same time that Rojava and Southern Kurdistan are being bombed massively, in Eastern Kurdistan (Rojhilat) and Iran, the crackdown on the people struggling in the streets has reached a new level and just like Turkey, Iran is also bombing Kurdistan. This situation once more shows the reality of the kurdish people and what they are confronted with once they demand a self-determined life. Everybody needs to understand that those who brought the slogan “Jin, Jiyan, Azadi“ to life, are the women of Rojava, are the guerrilla in the mountains of Kurdistan, are the people of Kurdistan! The struggle of the people on the streets in Rojhilat and Iran, the resistance of the guerrilla and the struggle of the people in Rojava is ONE and cannot be understood apart from each other!

For this reason, we call for everybody to get active immediately and take to the streets! Wherever you are in this world: Show your support for the people in Rojava!

→ Bring your action-plan into practice!
→ Block, Disturb, Occupy! Organize demonstrations, protests, and get creative!
→ Join the coming Action-Days from the 30.11. – 03.12. #WeSeeYourCrimes 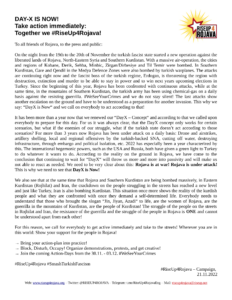